Skip to content
This article contains affiliate links. If you make a purchase after clicking on a link we may earn a small commission at no extra cost to you! Our content published after various means of research and and not influenced by commissions.
5 / 5 ( 2 votes )

We thought we should write two separate guides for the two consoles. But we decided to summarize it in a single piece cuz nobody has the time and energy to read both. And the best-recommended monitors for both ps5 and Xbox series x is the same anyway. So let’s go in-depth.

What should you look before buying a monitor for PS5 and series X? 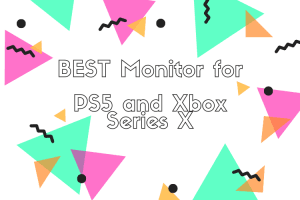 We have already explained everything about HDMI 2.1 and why it matters. But the point is there most games won’t actually run at 120fps 4k. The current gen PC graphics cards for much more money can’t run 4K120 . yet alone 8k…you might get most games run at only 4k 60fps.

And also, no monitor exists with such specs to support 4k 120hz. And a fully-fledged HDMI 2.1 monitor release is far far away. you can check some hdmi cables here though. We’ll update when new 2.1 monitors gets released…

And again we don’t want to explain it. We’ve already done this 2 years ago..1000 nits…sigh. You can read it here

So which one is the best for upcoming consoles?

The best, in our analysis are the below monitors for the following reasons.

Yeah and if you are going to watch planet earth…For extended viewing and to reduce the strain, it features TÜV Low Blue Light and TÜV Flicker-Free certification. The response time is 5ms. Its not advertised as a gaming monitor but…

This one is the best at the moment for the money you could buy at the moment. The monitor comes with 27″ 4K UHD (3840 x 2160) IPS Display with 10-bit color Quantum Dot Technology. It supports 99% Adobe RGB and DCI P3 color space as well.

There are other sizes as well, but the resolution is not the same. It supports upto 120hz using display port. The Grey to Grey response time is 4ms @ 4K.

There’s no HDMI 2.1, but this one does get the job done. And very well worth the money spent. Affordable for most people. It supports 4K UHD resolution (3840 x 2160) 27 inch IPS Display and sRGB 99 percent Color Gamut. HDCP 2.2 compatible as well as AMD FreeSync technology supported.

Don’t bother. Regardless this one is perfect. There’s also a cheaper alternatives 27UK500 and as well as VG289Q which you can save more money.

We have another golden alternative here as well it’s on par with uk500 in terms of performance and cheaper. It comes with a 28-inch 4K (3840×2160) IPS DCI-P3 grade display. And supports both Adaptive-sync with AMD Radeon and NVIDIA GeForce graphics cards. It’s aesthetically pleasing to eyes due to bezeless screen and as well as ergonomic design. Very well suited for casual console gaming.

We don’t think it’ll do any better than the previous great buy in terms of performance. But this one got some additional features like 10-bit panel , 2. 1 channel speakers w/a 5W subwoofer, and DSP-powered custom audio options. And also a very nice looking design.

There’s also a 27″ version of this monitor, Not a must-buy monitor but good to have. We’d instead save the extra money and get something else.

This one is advertised as a 10bit 4k monitor, but it’s not. It is also using 8-bit+ FRC TN panel. The price is affordable for most people though. The refresh rate is 40-60HZ. It has built-in speakers x 2. Overall a good monitor but we are not a fan of TN. Those like TN should check it out.

That’s it guys. We want to make it short and comprehensive as possible. We couldn’t find any other monitor that’s good for at the moment. If you heard or find any other display, inform us through mail or comment.